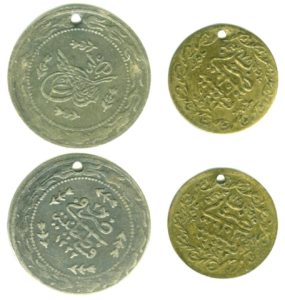 “The account of the revenue and expenditure of the Muslim endowments for the purpose of (assisting) the avariz and nuzul taxes10 for the (residents of the) Orhan Gazi 11 district of the city of Bursa during the trusteeship of Esseyid Halil Aga12, the trustee of the said endowment from the year 1200 in Hegira13 (1785) until the end of Zilhicce of the same year. /

This particular Cash Waqf was endowed with an initial capital of 2377.5 Grus. To this, the “profit” of the previous year was added which increased the capital to 2544 grus. Later, we have three other Awqaf further contributing to this 2544 Grus. The first contribution, 50 Grus, was provided by the Waqf of the Ayse Hatun14 for the purpose of reciting the mevlid 15. The second one, 85 Grus, came from the Waqf of Hakim Hatun, for the same purpose. Finally, the third contribution, 50 grus, also came from the Waqf of Hakim Hatun this time, for the purpose of buying candles for the Orhan Gazi Waqf. The total capital of the endowment thus, increased from the original 2377.5 grus to 2729 grus, a total addition of 351.5 grus. This enhanced capital of 2729 grus was then distributed as credit to 20 individuals. These investments generated a return of 257.5 Grus, murabaha fi sene-i kamile, which represented 9.4 per cent of the invested capital. Out of this return of 257.5 Grus, a total of 86.5 Grus were spent to assist the payment of avariz and nuzul taxes, to recite the mevlid, to buy candles, to pay the trustee and the bookkeeper, and for miscellaneous expenses. The remaining 171 grus was called the ziyade ez masraf and was added the following year to the capital of the endowment.”