“A royal offering to Re-Khnum, lord of the cataract region, preeminent in Nubia: ‘In return for these things that you have done for me, I shall offer to you your western border in Manu, your eastern border in Bakhu, from Elephantine down to Takhompso, comprising twelve schoenoi on the east and west, consisting of fields and canals, of river and of every place within the alloted schoenoi. Let every man who cultivates the fields and those who revive the slain by irrigating the banks and all new lands that are within the

25 allotted schoenoi deliver 17 their harvests to your magazine, / in addition to your share that is in Hermopolis.18 All fishermen and of all hunters who catch fish or trap birds and any sort of game, who trap any lions on the desert—I shall tax them one-tenth19 of the take of all these, and all the calves born of the herds within the alloted schoenoi in [their entirety]. I shall give the branded animals for every burnt offering and all daily offerings of every day, and I shall give one-tenth of gold, ivory, ebony, carob wood, ochre, carnelian, shrt, dlw-plants, nfw-plants, wood of every sort of tree, and everything that the Nubians of Lower Nubia20 bring to Egypt, and every man who goes under the supervision of those among them.”

—” The overseers of priests and the overseer of every- one of the temple will make my name remain in the temple of Khnum-Re, lord of Elephantine, mighty forever.’’

Stela: “The Famine Stela”, “composed and copied in the Ptolemaic period, though set in the Third Dynasty reign of Djoser, some 2,500 years earlier. The text provides the priesthood of Khnum at Elephantine with a ‘‘historical’’ claim to all revenue of the territory known as the Dodecaschoinus (twelve schoinoi, or some eighty miles), extending south- ward from Aswan into Lower Nubia.” 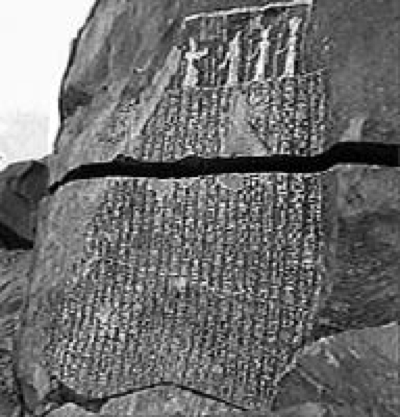