“Probably the world’s oldest topographical map … It was drawn about 1150 BCE by an Egyptian scribe named Amennakhte who prepared it for a quarrying expedition into the Wadi Hammamat (‘Valley of Many Baths’) in the middle of the Eastern Desert.  The map shows a 15-kilometre (9.5-mile) stretch of the wadi and its surrounding hills. The fragment pictured above–at the far left of the 280 cm (9’2”) long papyrus – shows the ultimate destination of the journey: the quarry (where they extracted a beautiful grayish-green stone to carve into statues of gods, king, and nobles), a gold mine, a small settlement, and a temple dedicated to the god Amun (the large white area in the middle subdivided by walls). Our scribe helpfully labelled the map’s main features; for example, he tells us where the roads lead to, notes the distance between quarry and mine, and gives the locations of more scattered gold deposits in the hills. Unlike modern maps, however, the top of the map is orientated to the south-west; that is, to the source of the Nile river in Nubia, so we have to read it more or less upside down.”

This upside-down observation about maps remain in effect all the way until the early modern world and European mapping of the world. 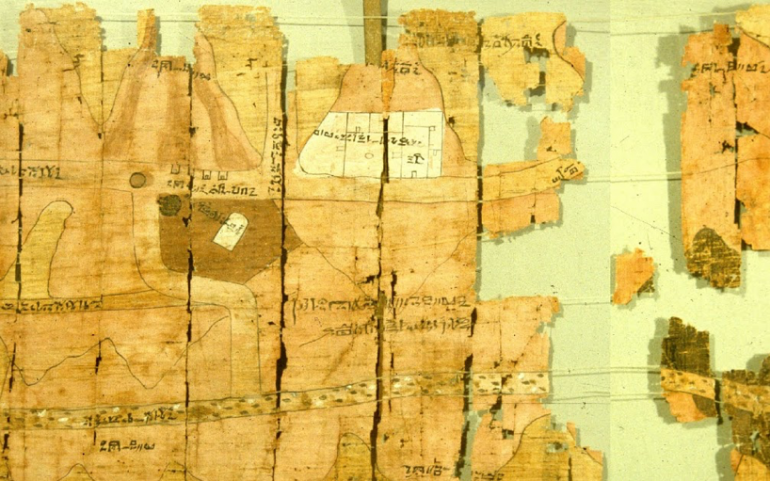