This is a 19th century representation of the map of the world as described by the Greek/Roman geographer/philosopher Strabo (b. 64 B.C.) in his massive seventeen volume work, Geographia. Having travelled widely, Strabo described the world of his age or at least what he believed to be the inhabited parts of the globe. The continents of Africa, Europe and Asia are here surrounded completely by water, and the basic structures seem to be in the correct place notwithstanding the lack of knowledge regarding relative size. Herodotus (425 BC), had earlier also wrote about his travels in The Histories, and gave similar details of Africa.

It seems that Africa to the Greco/Roman world was known as Libya and they believed it to be surrounded by water. The description of the Nile was also quite accurate in the descriptions of the two philosophers and the interconnectedness of Africa with Arabia are also shown to be normative for that age. Egypt’s trade interest with Arabia and Africa called it to dig a canal to join the Nile with the Red Sea, the first effort to connect the Mediterranean—referred to as the North Sea—to the Indian Ocean. 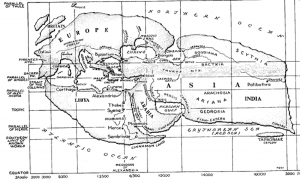