This now famous map of the Antarctica is a source of speculation about ancient knowledge of the world and technologies that could date back to ancient times. The map was compiled by an admiral in the Turkish navy, Piri Reis, after whom the map is called; it is based on maps and narratives he found in the royal library in Istanbul. The map was discovered in 1929 drawn on deer skin and incomplete. It is the more complete part dealing with Antarctica that has been the focus of interest because of the details it shows that have proven their accuracy with the modern cartography of Antarctica and the fact that the coastline described has been under ice (about a mile thick) back to almost 4000 BC.

For the Indian Ocean world, the map is particularly significant since it gives detailed descriptions of the western coast of Africa and the eastern coast of Latin America facing it. How far back was the coast of Africa familiar to seafarers, the exchange of goods, people and knowledge? 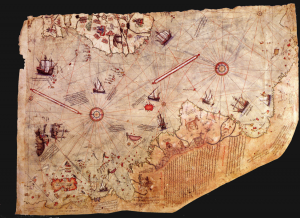 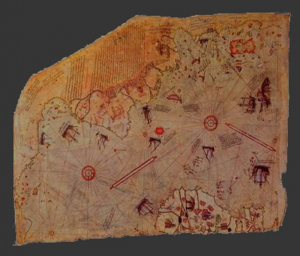 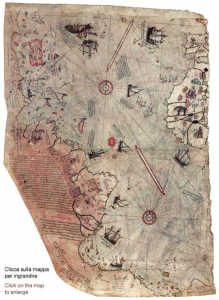