The geographical focus of the Book of Curiosities is Muslim commercial centers of the 9th-to 11th-century eastern Mediterranean, such as Sicily, the textile-producing town of Tinnis in the Nile Delta, and Mahdiyah in modern Tunisia. The author is equally acquainted with Byzantine-controlled areas of the Mediterranean, such as Cyprus, the Aegean Sea, and the southern coasts of Anatolia. The author’s occasional use of Coptic terms and Coptic months, together with the allegiance to the Fatimid caliphs based in Cairo, suggest Egypt as a likely place of production. Book composed before 1050.

The second book, on the earth, is divided into 25 chapters. According to the author, this second book is largely dependent upon the Geography of Ptolemy. In general, though, the author’s interest is descriptive and historical rather than mathematical. Along with geographical and historical texts, two world maps are provided, one rectangular and one circular. He then follows with maps of the great seas known to him, which were the Indian Ocean, the Mediterranean and the Caspian. The author was particularly interested in depicting the shores of the Mediterranean, of which he probably had first-hand knowledge. Besides the detailed schematic map of the coasts and islands of the Mediterranean, the treatise also contains unique maps of Sicily, Cyprus and the commercial centers of al-Mahdiyah in North Africa and Tinnis in Egypt. The treatise also includes five unique river-maps of the Nile, the Euphrates, the Tigris, the Oxus, and the Indus. The concluding five chapters describe ‘curiosities’ such as monstrous animals and wondrous plants. 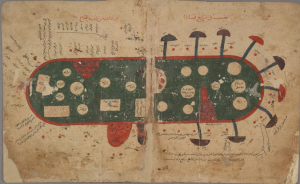 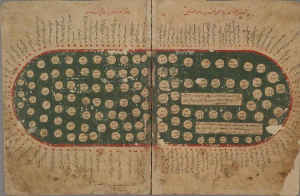 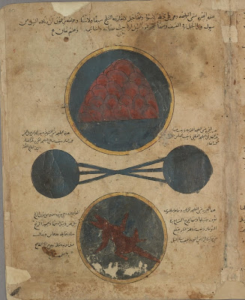