Early Arab maps depicted the world in spherical shape with the land mass of Africa, Europe and Asia surrounded with water. The map was oriented to look southward first, placing South on top and North looking downward. The maps clearly identified East, West, South and North, and showed familiarity with inner seas, waterways and river basins. Africa seems to dominate Ibn Hawkal’s 10th century map, with the Nile river line extending far into Africa. Perspective is not accurate, but knowledge of peoples living on the shores of Africa to the north, designated as “bilad al-Arab”  (“land of the Arabs”), and down the Atlantic with people designated as Muslim or kuffar (non-believers). To the East, Egypt, Ethiopia, Nubia, bilad al-zanj (land of the Zanj) and other territories are identified.

Muhammad b. Hawkal traveled during the tenth century to collect information of the inhabited world of his time. His trips, said to have lasted for nearly three decades, brought him into contact with important geographers and intellectuals of his age with whom he worked and exchanged knowledge. The result was his book Surat al-Ard, which is regarded as foundational for the state of geographical knowledge of the Arabs during the high Abbasid period (750-1250). One of his important collaborators was Al-Istikhari, whose work and maps of the world give evidence to this cooperation and show the international nature of the exchange of knowledge during that early age.

Both maps and others of that age are focused on the Arab heartland with the Mediterranean and Indian Oceans filling prominent centers. This was probably due to the interest in sea-navigation and voyages of the map-makers and the vigorous trade and exchange taking place as well as pilgrimage which seemed to have gained in popularity and gave greater reason for travel.

At the top in both maps, sits Africa and the Nile is defined as are the Tigris and Euphrates and other waterways in Asia. Ibn Hawkal’s map is more elaborate on Africa, showing the lakes as the source of the Nile and various peoples and tribes that were familiar to Arab travelers of Africa. A reading of Ibn Battuta, who traveled through Africa in the fourteenth century, shows the same familiarity and gives greater knowledge and details about the African nations among which he traveled and lived for a while. 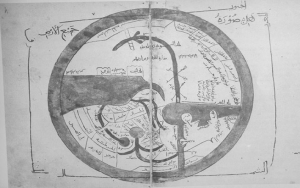 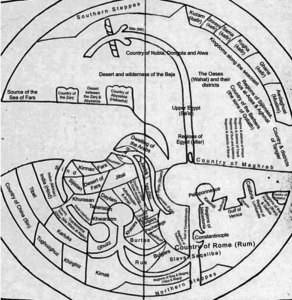 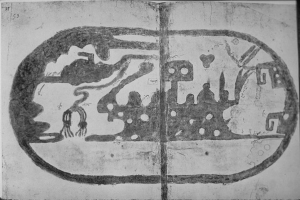