Described as a transitional map marking the period between the end of the medieval period and the beginning of the Renaissance, this large 6ft 4 in map drawn on parchment, shows that the world was viewed “upside down” by Europeans of the medieval period as it had been earlier by Arabs. While the orientation of the map was Jerusalem, as would be expected of the monk who drew the map, it is the southern hemisphere that contains most of the details with Europe containing much less details, evidence that the Afro-Indian world was central into the medieval and early Renaissance periods.

This is a very detailed map and illustrates extensive knowledge of Africa and Asia during the late medieval period among Europeans. Of particular interest are the significant number of towns and urban settlements to be found all over Africa, small settlements, big settlements in the shape of various types of buildings, castles, and enclosed towns. The same can be said about the details of Asia, which is not surprising; as in the case of Africa where normative history has shown it as little urbanized until the modern period. Certain location names in Africa have remained unchanged till today like Mauritania, Ethiopia, Nubia and Egypt. Seafaring seemed to overwhelm the seas in this map, the numbers and types of ship carrying goods and people fill up the water areas of the map illustrating how active travel and trade were in the fifteenth century.

To see the map in high definition: http://www.bl.uk/magnificentmaps/map2.html 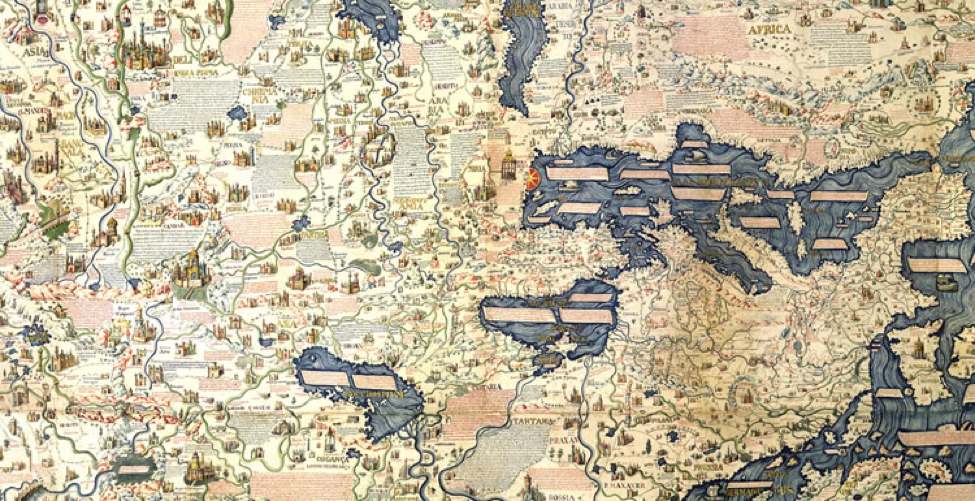 “Long before the famous Earthrise photo taken by Apollo astronauts, creating an image or map of the entire known world was a singular human endeavor. Imagine a half a millennium earlier when only those who had traveled could describe distant lands. Imagine watching the hustle and bustle of merchants and sailors returning to the port of Venice. What stories could they tell to paint a portrait of our planet?

Fra Mauro, a Venetian monk and cartographer from the mid-15th century, made it his life’s work to chart the course of merchants and travelers in order to create the most definitive map of the world. Accounts from travelers interviewed by the monk are found throughout the map as citations of integrity. No sailor’s tale was too mundane or merchant chart too crude for Fra Mauro. He wanted to chart the known world as traversed from the Mediterranean to the horn of Africa and to the far reaches of the Orient.

Fra Mauro’s map was likely heavily influenced by Arabic accounts, as the map is oriented with South at the top. This may seem confusing to our contemporary view of the world, but upon close examination of the map, the outline of the Mediterranean Sea, the boot of Italy, and the Black and Caspian Seas are clearly visible. The well-known Apollo 17 image of Earth was originally photographed with South at the top and turned around to be more recognizable to our North-oriented sensibilities. (Interestingly, a lunar crater and surrounding formations were named Fra Mauro in honor of the monk. This area was the intended landing site for Apollo 13, and was later visited by astronauts on the Apollo 14 mission.)” 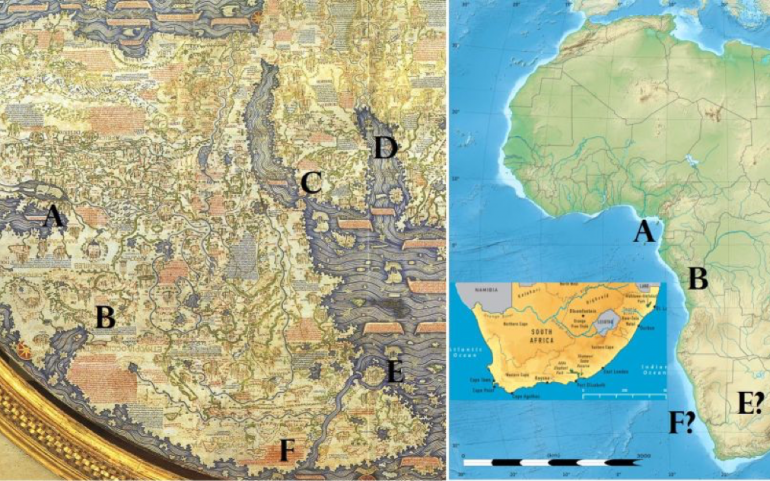 Details of south Africa in the Frau Mauro map 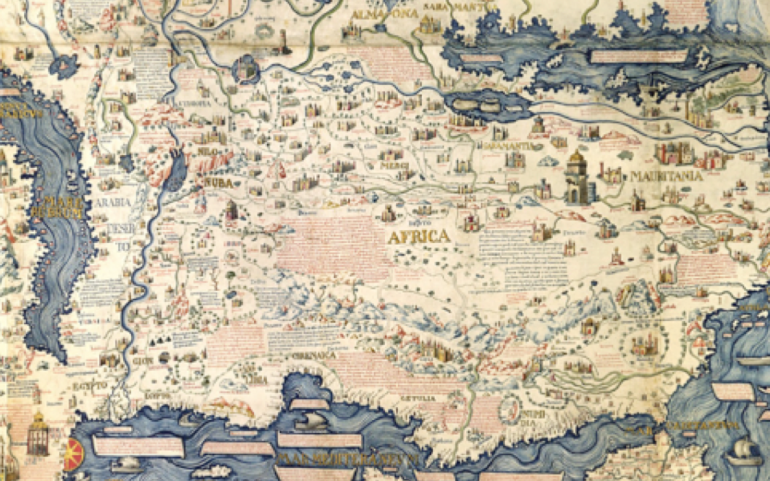