“Necos king of the Egyptians first of all those about whom we have knowledge. He when he had ceased digging the channel 43 which goes through from the Nile to the Arabian gulf, sent Phenicians with ships, bidding them sail and come back through the Pillars of Heracles to the Northern Sea and so to Egypt. The Phenicians therefore set forth from the Erythraian Sea and sailed through the Southern Sea; and when autumn came, they would put to shore and sow the land, wherever in Libya they might happen to be as they sailed, and then they waited for the harvest: and having reaped the corn they would sail on, so that after two years had elapsed, in the third year they turned through the Pillars of Heracles and arrived again in Egypt. And they reported a thing which I cannot believe, but another man may, namely that in sailing round Libya they had the sun on their right hand.” 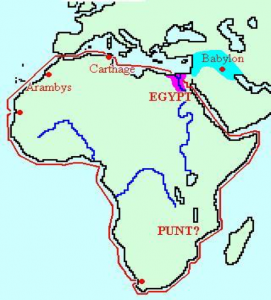