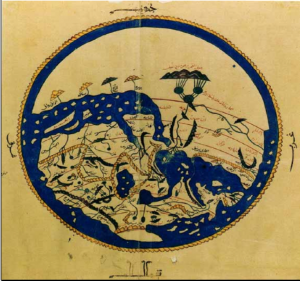 “In the year 1138, the royal palace at Palermo, Sicily was the scene of a long-awaited meeting between an unusual Christian king and a distinguished Muslim scholar. As his visitor entered the hall, the king rose, took his hand and led him across the carpeted marble to a place of honor beside the throne. Almost at once the two men began to discuss the project for which the scholar had been asked to come from North Africa: the creation of the first accurate—and scientific—map of the entire known world.”[1] The scholar was Abu Abdullah al-Idrisi or Morocco, an Arab geographer and map whose map, the product of the cooperation between the two men, remained the most accurate world map for the following three centuries. It continued the southern orientation of world maps with Europe toward the bottom, and was clear about the circular nature of the world.
[1] http://cartographic-images.net/Cartographic_Images/219_al-Idrisi.html